skip to main | skip to sidebar

Page and I have a new member of the family! His name is Teddy (for his resemblance to a teddy bear) and he has a ton of charm. With a great attitude and cuteness to spare, a lot of people think we got him at the pet store. However, Teddy is an ex inmate of the Brownsville Animal Shelter. If you are in the market for a new dog or cat the "pound" is the best place to start. I was astonished (and saddened) at the amount of good looking animals they have that need a home. We could have easily been happy with a dozen different dogs, but in the end decided on the teddy bear. If you are interested in getting an animal from the shelter I have included the contact information below.

Posted by Richard Parker at 11:01 AM No comments:

Another great show in McAllen! The census showed there to be over 500 brides at the show and judging by the quality of my voice today we talked to a good percentage of you. I just wanted to say that we had a great time and met a lot of cool people. If you didn't get to talk to us or you forgot to ask a question, please don't hesitate to call or email. God bless.
Posted by Richard Parker at 4:23 PM No comments:

I had the privilege of attending an event put on by the Brownsville Chamber of Commerce last week that was really interesting. It was called "speed networking." The event basically gave business owners and/or business presenters a chance to meet and network together. Each business had 60 seconds to tell the others who they were and what they did in the community. Many of you are probably saying at this point "who cares!" but it was a real inspiration, to me, to see so many people excited about making Brownsville a better place. Although I had to leave early for a previously scheduled appointment, I was real impressed to see a positive glimpse into our future here "on the border by the sea."
Posted by Richard Parker at 5:27 PM No comments: 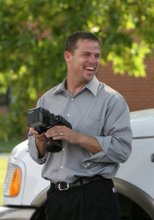